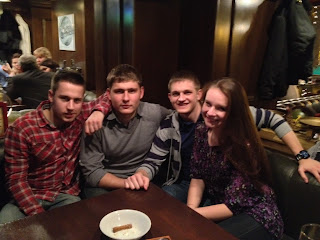 I received some emails with questions about the blog, what I do, when do I have fun, so I thought I would write about my out of class activities. (After the last post, you may have gotten the idea that there is a lot of time when I am not in class.)

Q: Hey, Sam, where are the pictures of guys? (anonymous)

OK, look above. These 4 guys took me to "Our Pub" as they called it, one Friday night. The pub is a restaurant on the square that surrounds City Gardens, one of the key gathering places in Odesa. The pub makes its own beer, serves authentic Ukrainian food, has an English menu and is pretty good. Turns out that these guys are like most of the students I either met or saw outside of class, they just don't drink much. Each of these students had one .05L of beer, except Oleg, the guy one from the left, who drove. He drank tea. Ukraine has very strict drinking and driving laws, I was never in a car with anyone that I suspected had been drinking; as far as I could tell, drivers know about and make sure that they don't run a foul of the tough sanctions imposed when you are caught having had too much to drink. In order, Victor, Oleg, Sergei, Valerie. I think the evening was her idea. Sergie and Valerie were class monitors. That means that they carried around an old fashioned class enrollment book, with the names of student in their section, the monitor took the book to each professor at the end of class and the space for that class period was  initialed by the lecturer. I never found out if the monitors check off who attends each class or not.
Anyway, that was a fun evening.

Q: What do you do for fun? See above.

No, seriously; every day is fun! It really is. Too confront a very different culture and learn how to function in it, is fun.

Q: What else do you do besides have fun?

In January I read all five books comprising Game of Thrones on my Kindle. Quick review--First one was dynamite, second very very good, in the third I started losing track of the characters, fourth and fifth became to fantastical for me. (But then I am a very serious lawyer, scholar, who has come to Odesa to convert Ukrainian law students in to exponents of Democracy and The American Way of Life.) But, during those long cold nights in my little apartment, when I had no Internet, Game of Thrones was a wonderful companion.

Q: What are you eating?

To start with, not very much. I have Fiber One (1/4C) and Ukraine Muesli like stuff (1/2C) with 1C, 0% fat yogurt, a grapefruit, 1 oz of cheese. If I eat lunch in the school cafeteria, it could be excellent steamed salmon with rice, or a serving of also excellent mashed potatoes, or maybe a serving of OK only spaghetti. More often I have a cappuccino and a cookie or slice of cake around 2:00 or after class if the class meets from 1:20 -2:40 that day. At night, I developed a one dish meal made of a package of frozen vegetables, cooked in my skillet, flavored with soy sauce, with the lid on so it steams more than fries. Sometimes I added salmon or an egg. Sounds much worse than it actually was. But I usually ate cheese and Rye Wasa crackers or cheese and bread. 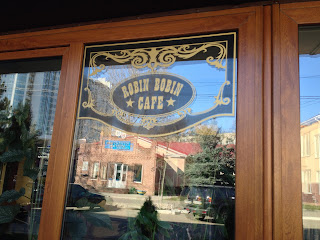 Q: How about eating out?

I burned out on Peoples' Cafe/Bar/Sushi/Games Restaurant in February when I went there almost every night to use the Internet and make Skype calls to the USA. (Odesa is 7 hours ahead of the EST and 8 ahead of CST)  Robin Bobin is on the street that runs beside the Academy. (See the photograph of the side entrance, blog entry) It is pretty good, they have a year or two old English menu. When I pick out my dish the waitperson compares the price with current ones and makes sure I understand if there is a difference. Smoking inside public places was banned in Ukraine last year, but for some reason uknown to me or the students that I have met at Robin Bobin, customers are allowed to smoke in one inside room. There are several Robin Bobins  around the city, each has different decor. This one has been updated to American West decorations. There are saddles, spurs, prints of the Grand Canyon. It is very lovely with tasty food. (Any time a Ukrainian described food that he or she liked in English, the words used were always "tasty" or "very tasty". I do not take the bus to the city center to eat during the week as it is a minimum of thirty minutes each way.

Q: Do you have a daily routine?

Funny someone asked that, because I did. I got up every day at 6:30 or 7:00 a.m., went for an hour walk, came back, had a cup or two of instant coffee, ate my grapefruit, followed by cereal, and my oz. of cheese. Showered when necessary (tried to avoid showers as I never knew when the hot water would become cold water) and was usually at the school by 9:30. Every Friday, I took a hundred dollar bill to my local Diamond Bank branch and turned it into 811 Hrvina. Unfortunately, the weather turned very cold the third week of February, and I did not walk for about a week. When I started again, I found that I had lost significant condition and walking  very far was difficult. But I knew that I would walk each day within a few weeks I would be back in walking condition.

Any problems with buy food and other sundries?

Not really, except that although I could tell fish from fowl and fowl from meat, I could not differentiate between meats. One night I cooked what I thought was beef and it turned out to be pork. I have learned that if you can remember to speak a few words of the language, "please, thank you, good morning, hello, good bye", it helps tremendously when paying for items. I also always have my money or credit card ready in order not to hold up the line. Just like grocery stores in the states; Ukrainians become upset when they have to wait in check out lines for people who did not get their fruit, vegetables or cheese priced or can't seem to find the correct amount of money. 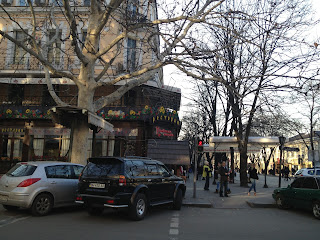 ANOTHER UKRAINE  CHAIN RESTAURANT
(ON THE CORNER, SEE THE BUNTING)

Q: What are the laundries and dry cleaners like? Do you spend much time in laundromats?

No, I don't because I have a washing machine. I believe that almost all apartments have a washing machine.
I was shown, incorrectly, how to use it by Barskyy the first day I was taken to the apartment. His wife visited on 15 February, the Friday, when the Internet Provider Company had two "engineers" appear to
fix the Internet, and showed me the correct way to use the machine. It worked extremely well until mid-March when it started acting strangely. The last month or so, it never shut off. One morning I started the machine at 9:00 and when I came home that evening around 8:00 p.m., it was still dutifully cleaning my clothes. Another time I put it on at 8:00 p.m., went to bed around 11:00 and woke to hear its cheerful hum as it went in and out of the rinse and spin cycle.  So, I learned to just shut it off after four hours, and let my clothes drain over the bath tub before hanging them on the clothes rack for complete drying.

Q: Is it extremely cold?

No, Odesa is on the Black Sea and is much warmer than inland Ukraine. It is cold in February and March, with temperatures in the high 20's at night and high 30's to low 40's by day; but there was not a great deal of snow; no snow banks to walk through and very little ice on the sidewalks. There is a very strange phenomenon regarding the weather. In the morning, the temperature might be quite temperate and then become cooler, even cold as the day went on, even when there was a bright sun. Each day, the wind would shift from coming out of the sea, to blowing from the interior and dumping  very cold air into the city. Just the opposite of what I thought would happen, the day would cool down, instead of warm up despite bright sunshine.

Don't miss the next installment, which which will discuss my agreement to prepare and give eight lectures on American Law, report the results of my film series and contain other scintillating information about Odesa. (The Russian and English spelling is Odessa, but in Ukrainian the word is spelled Odesa. Although Russian is the lingua franca of the region around Odesa and the Crimea, the Ukrainian spelling is  always used with the Roman alphabet.)
-30-

Posted by Travels with Sam Graham at 3:27 AM No comments:

What'd You Miss? Past Posts